Flying for a better world

Embracing the new philosophy of innovation, coordination, greenness, openness and sharing, Xiamen Airlines firmly practices sustainable development as the core value of the enterprise by implementing sustainable strategies and taking active actions to support the United Nations Sustainable Development Goals (SDGs) and achieve the harmonious and unified development of enterprises, nature, and society.

United Dream to Fuel the SDGs

On February 15, 2017, Zhao Dong, then President of Xiamen Airlines, and Cristina Gallach, then Under-Secretary-General of the United Nations (UN), signed an agreement on a joint effort to promote the Sustainable Development Goals (SDGs) at the UN headquarters in New York. The signing ceremony was witnessed by Wu Hongbo, then UN Under-Secretary-General, and Liu Jieyi, then China’s Permanent Representative to the UN, Ambassador Extraordinary and Plenipotentiary, who highly praised Xiamen Airlines for its global leadership in supporting and practicing the 2030 SDGs.

January 2018 saw the official delivery of the world’s only aircraft painted with the special UN-sanctioned livery to Xiamen Airlines at Boeing’s Charleston plant. The ceremony was attended by Alison Smale, then UN Under-Secretary-General on behalf of Secretary-General Guterres and Cui Tiankai, then Chinese Ambassador to the United States.

After a global call for names, Xiamen Airlines named the aircraft “United Dream”. The aircraft has a predominantly blue body, representing goodness, hope, and an unlimited future. The white wave on its belly symbolizes the oceans that nourish the lives on the earth. The body is also painted with the slogan, “in support of the UN”, while the tail fin is adorned with 17 UN SDGs icons.

The United Dream aircraft fully highlights sustainable development themes. Apart from the body painting, in all other aspects, from cabin configuration and in-flight entertainment system to green food and thematic events, the plane will be transformed into the “Ambassador in Air” for the UN SDGs. It has undertaken several major transport missions, including the trial flight and maiden flight to Beijing Daxing International Airport, transport for the replacement of the Chinese peacekeeping force in Mali, and transport of global epidemic prevention supplies. The aircraft has also been tasked with such themed flights as “Youth and the Earth” (corresponding to SDG 13 Climate Action), “We Are In Action” (corresponding to SDG 15 Life on Land), “Run for Clean Seas” (corresponding to SDG 14 Life below Water), and “423 We Read Together” (corresponding to SDG 4 Quality Education) to engage more organizations, companies, and individuals in supporting the UN SDGs. 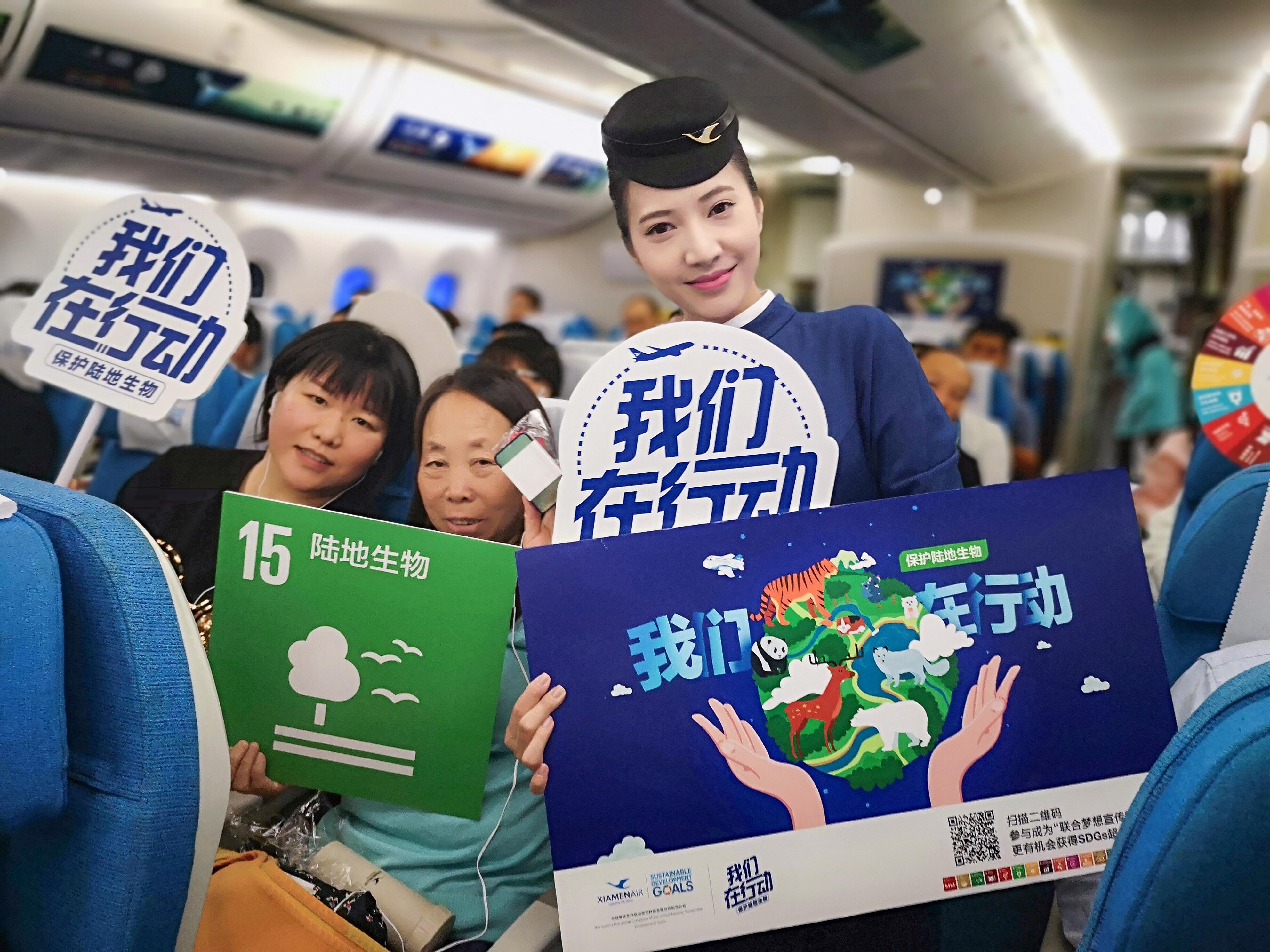 Xiamen Airlines has been holding the SDGs City Exploration Competition with tasks centered on the 17 SDGs in different cities every year since 2019. It is the only SDGs theme-based public welfare event in China, which has attracted nearly 600 teams in many cities such as Xiamen, Changsha, and Chongqing.

Low-carbon Operation for a Greener Planet

The transport sector contributes one-quarter of global carbon emissions, including 2 percent from aviation. Xiamen Airlines has been involved in planned fuel saving for three decades. In 2012, with an awareness of the impact of carbon emissions on the environment, society, and business operations, Xiamen Airlines became the first Chinese airline to carry out energy conservation and emission reduction. By reducing unnecessary fuel consumption and emissions to the extent possible, Xiamen Airlines contributes to reducing global aviation’s impact on climate change.

Safety is always our first quality. Xiamen Airlines insists on “zero tolerance for safety hazards” to consolidate and improve the safety fundamentals as the core line and advocates the core values of “competent, disciplined, honest and responsible” to make active efforts to build a sustainable development environment that is safe, reliable and healthy. By the end of March 2022, we have reached a cumulative total of 7,160,000 safe flight hours, ensuring 435 months of flight safety and 339 months of air defense safety. This solid safety record earned us the Flight Safety Five Star Award from the Civil Aviation Administration of China (CAAC). Moreover, we are the world’s first airline to be awarded with IOSA Outstanding Achievement Award and successfully passed the 9th review of the IATA Operational Safety Audit (IOSA). 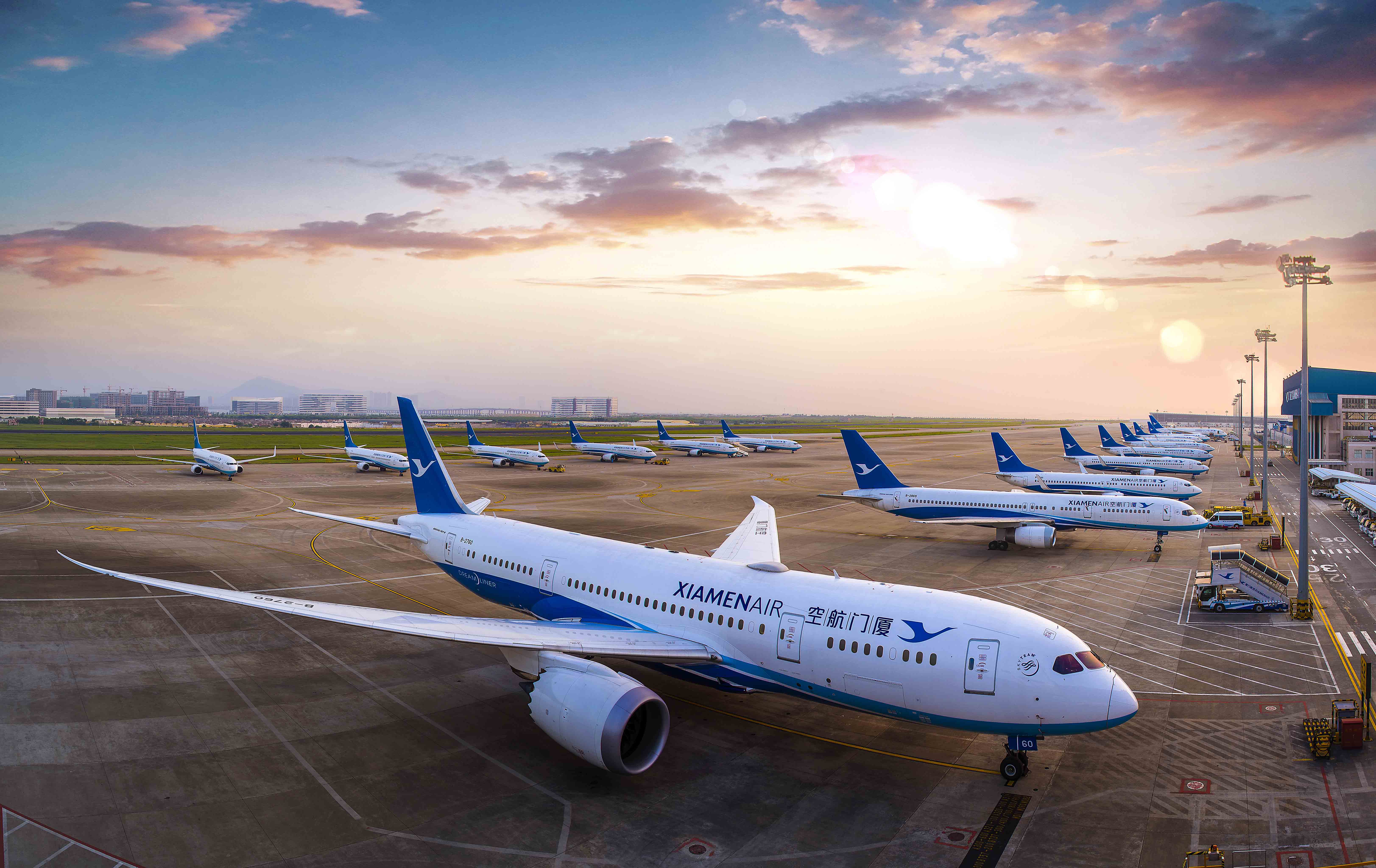 Xiamen Airlines has been introducing the most advanced and fuel-efficient aircraft. We have introduced 12 B787 aircraft with outstanding fuel efficiency since the 13th Five-Year Plan and ordered 85 new aircraft equipped the world’s latest energy-saving engines (figures to be delivered as of December 2025), cutting carbon emissions by 20% and 14% respectively, compared to the replaced ones. We have also retired 21 old aircraft early to keep the fleet age under 7.67 years, becoming one of the youngest fleets in the world.

3. Saving fuel in the air

Xiamen Airlines has developed refined flight plans and launched projects such as flexible flight levels, dynamic cost index, approach-departure distance optimization, and 5% contingency fuel policy to solidify the expected fuel-saving results. A monitoring system has been established for fuel consumption in all phases of flight to realize refined management of the whole flight process. Besides, the weight of each aircraft is managed to be reduced by about 500 kg on average with efforts to reduce aircraft drag and weight by replacing steel brake with carbon brake, filling drinking water based on the passenger load factor, promoting electronic flight bag (EFB), adopting new lightweight seats and lightweight food trolley, refitting lightweight galley, and reducing onboard magazines. Also, Xiamen Airlines has improved aircraft engine performance and adopted dynamic water washing of engines, thus effectively reducing the hourly fuel consumption of engines. 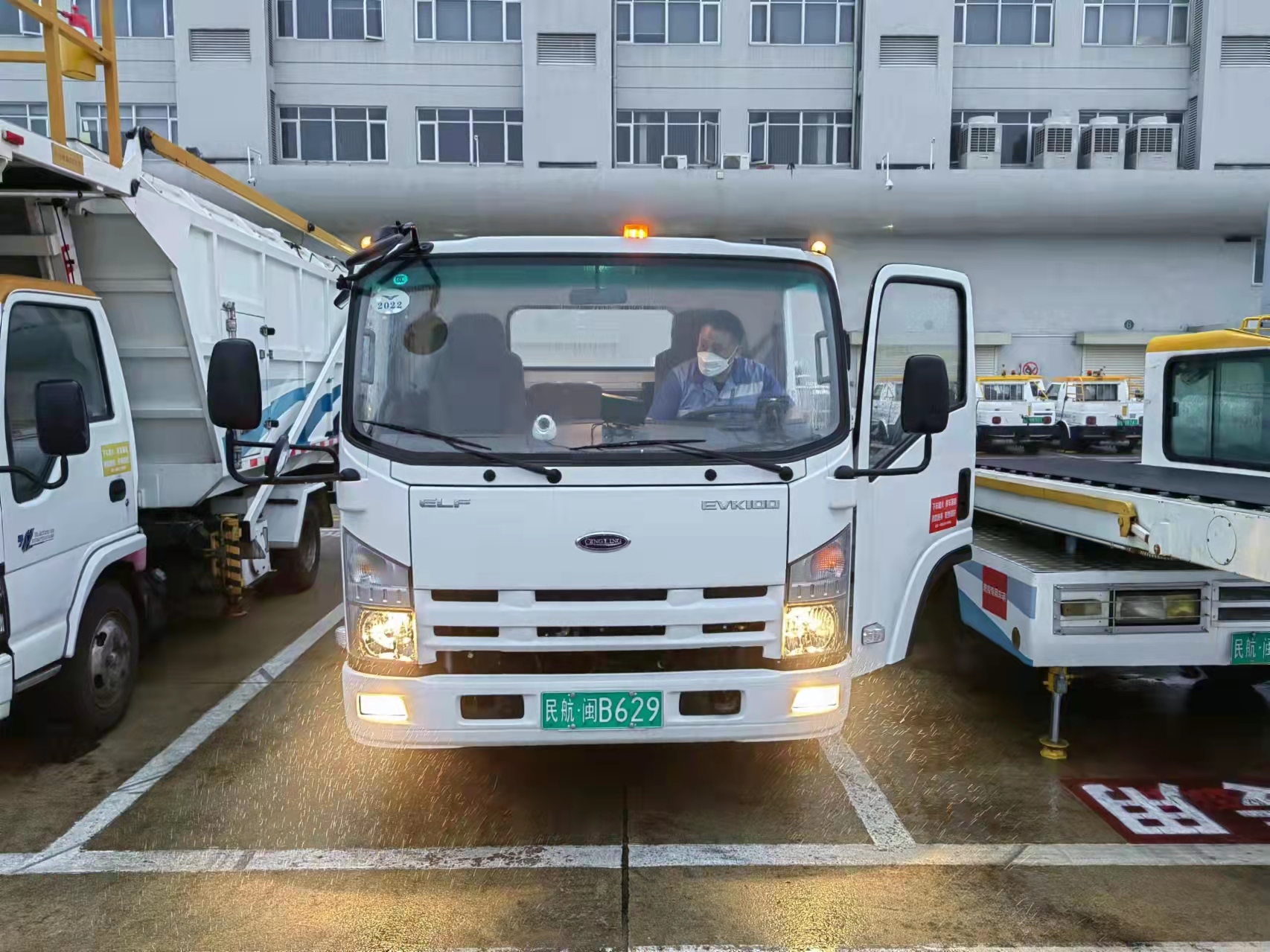 Xiamen Airlines keeps pushing forward the conversion of fuel-driven to electricity-driven, and has invested in purchasing apron-based new energy vehicles, renovated the scrapped fuel vehicles, and promoted the use of GPU (ground power unit) instead of aircraft APU (auxiliary power unit).

We are the first in Chinese aviation industry to introduce the Egret Bamboo series of green products as substitutes for the original paper and plastic ones. Cups, trays, and tableware are made of 100% renewable natural bamboo pulp and drinking straws made of biodegradable PLA eco-friendly materials. In the case of replacing onboard plastic cups with paper ones made of bamboo pulp, for example, we have reduced the use of plastic cups by 15.92 million in 2021, totaling 167.16 tons.

We’ve launched the “Chef XiamenAir” brand to develop sustainable meals based on the concept of “Revive your taste”, allowing people to roam the farm with delicacy on the table. Some ingredients are made from products under agricultural assistance program, and we promote meal selection services to reduce food waste.

We have developed our new technology of omni-channel e-boarding pass, providing self-service check-in support for more than 22 million passengers each year, effectively reducing carbon emissions of about 330 tons. We partner with Alibaba’s evironmental project Ant Forest to advocate green travel to enable passengers to obtain “green energy” through online check-in. It is expected to save about 7 million boarding passes a year, and about 1,900 haloxylon trees can be planted with the green energy generated. We have also developed green products, becoming the first batch in China to release carbon-neutral air tickets and have launched carbon-neutral flights in February, 2022.

We base our green building design on the three concepts of “people-centered, ecological and low-carbon, smart operation and maintenance” to reasonably control building energy consumption from the source. In terms of green building construction, we adopt renewable energy technologies such as air-source heat pump hot water system, choose green building materials such as low-radiation thermal glass capable of reducing air conditioning energy consumption, and practice sponge city program at some bases. We also emphasize the operation of green buildings and optimize daily energy consumption. The main work of the new production base and headquarters building project under construction has been certified as a one-star building by GB/T50378 Green Building Evaluation Standard and rated as gold level by the International Green Building Rating System.

Xiamen Airlines has assigned cadres to live and work in villages for six consecutive years. In addition, with an organic integration of the UN SDGs with China’s rural revitalization, we have brought together resources of all sides and concluded framework agreements on poverty relief cooperation with the People’s Government of Shouning County, Ningde City, and Empereur Tea Co., Ltd. to build a 10,000-mu tea garden and alpine tea culture center in Shouning County, Ningde. The Shouning alpine black tea is sold on Xiamen Airlines’ own e-commerce platform, with its popularity enhanced through the Tianji Teahouse cabin service, thus tapping into the development potential of poor areas. In cooperation with Ho-Lan Soul (Ningxia) Winery, the 5,000-mu Xiamen Airlines Grange was established in Minning Town, opening up a new model of sustainable development in collaboration with Minning. Meanwhile, the Xiamen Egret Volunteer Alliance, initiated and led by Xiamen Airlines, has carried out distinctive, attractive and effective youth volunteer service projects centering on the 17 UN SDGs, spreading the concept of sustainable development and fulfilling the commitment of carbon peak and carbon neutrality. 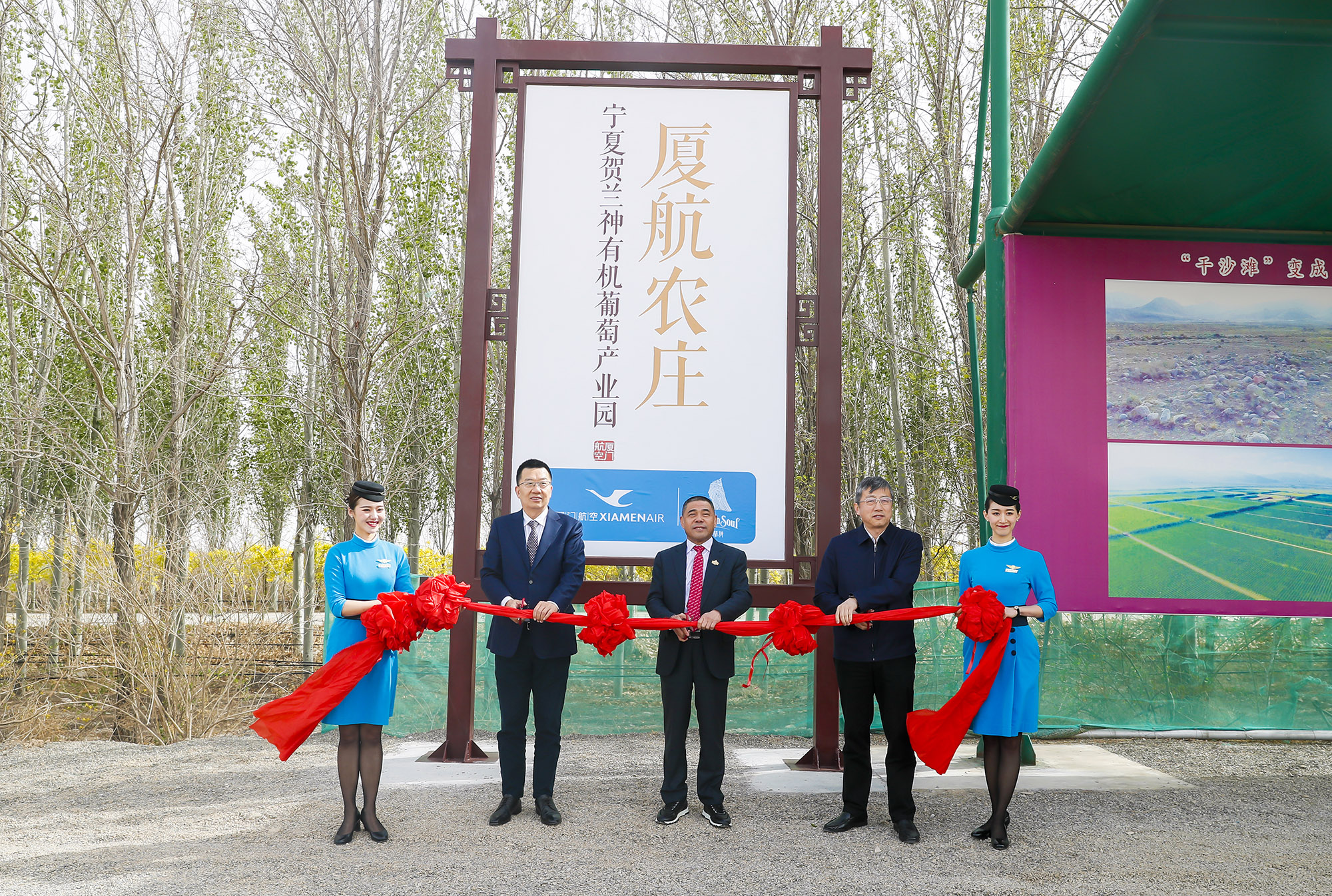 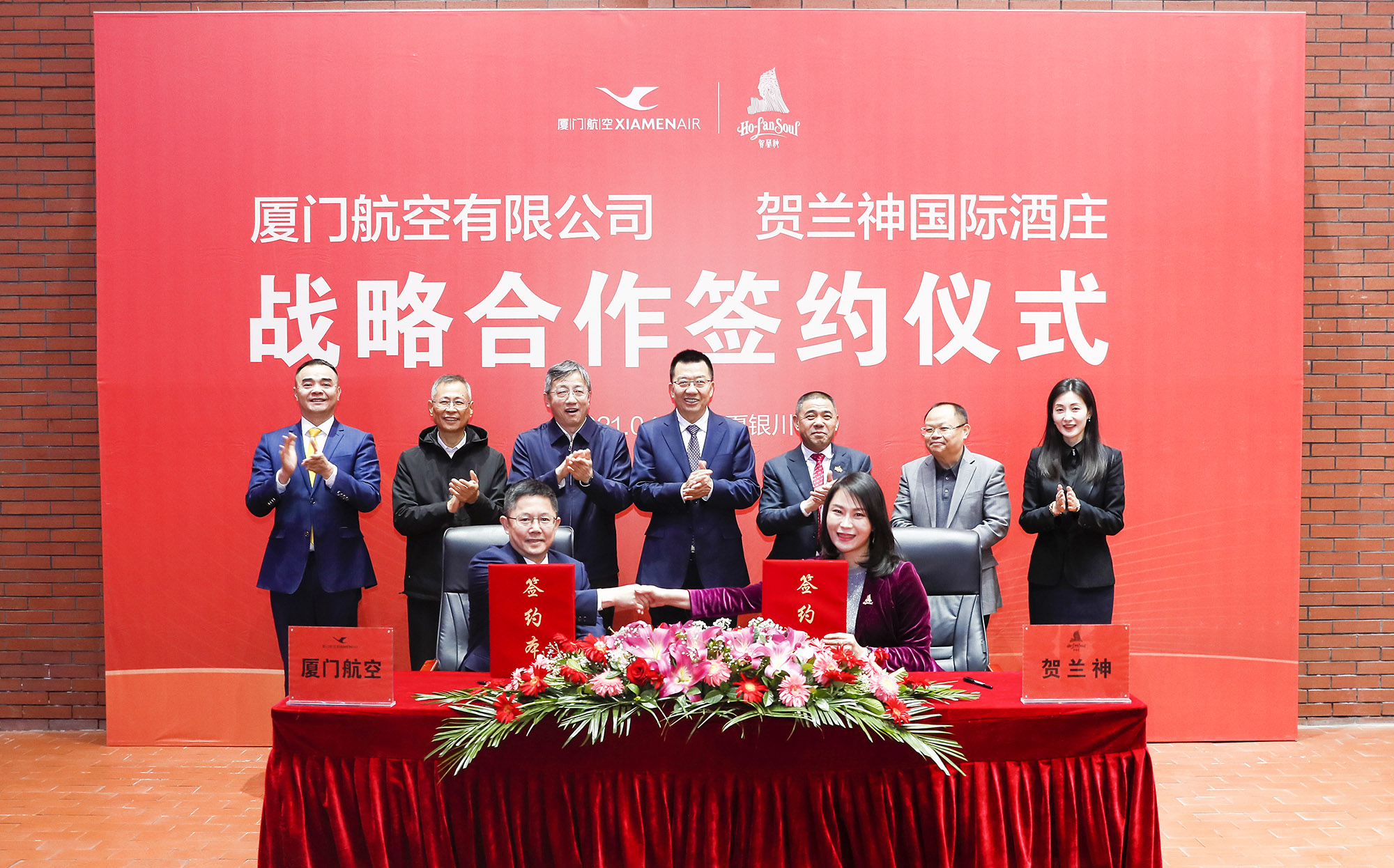 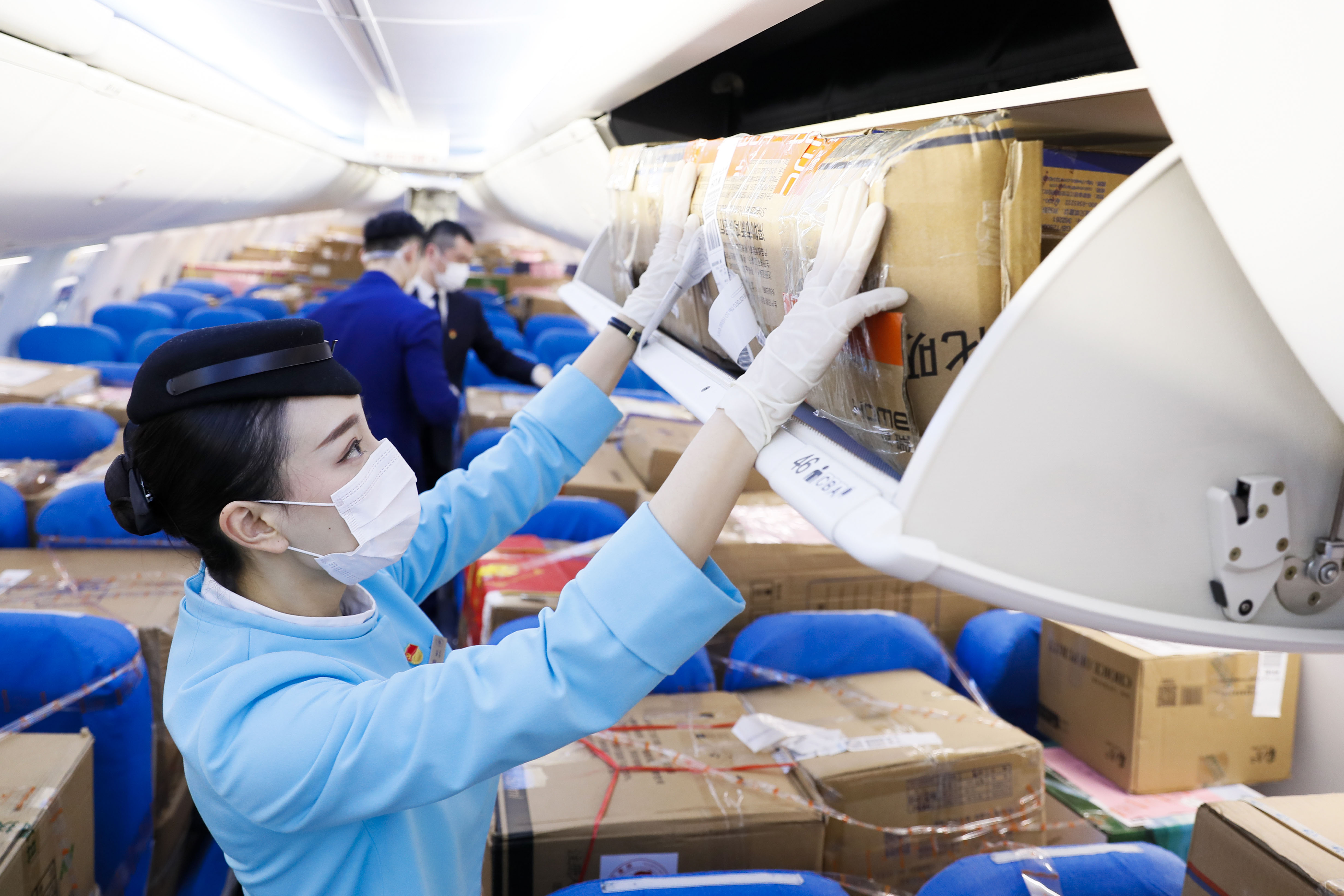